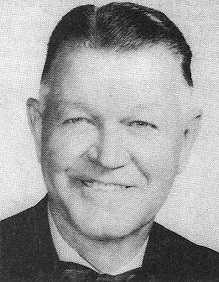 Biography: Willard Larson served as an Illinois High School basketball coach for 22 seasons.  He started at Canton High School in the 1937-38 season.  In 9 seasons at the Fulton County school, his teams won three conference championships.  His Canton teams made 4 IHSA state tourney appearances with the 1940-41 squad placing 4th.  His efforts at Canton are well remembered as the Little Giants, through 1944, had made more state tournament appearances than any other high school in Illinois.  He is also well remembered for his contributions to the Canton football program.  He was honored at a Willard Larson Day in 1977 at the Canton Elks Club.  Before coming to Canton, Willard coached 13 years at Collinsville High School winning 8 Southwestern Conference crowns and sending 2 Kahok teams to the IHSA state tournament.  His final squad finished 3rd.  His teams compiled an overall record of 428-145.  Willard Larson died on October 27, 2011 at the age of 86.