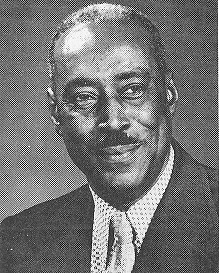 Biography: Joe Russell pioneered equal opportunities for black schools in Illinois.  After four years at Mounds Douglas HS, Russell moved to Carbondale Attucks HS in 1943. Attucks became the first all black school to participate in the state playoffs.  The Bluebirds under Russell won nine of ten districts and the 1952 Herrin Regional.  For this, Russell was named the Southern Illinois Coach of the Year in 1952.  In 1957, he moved to Decatur Eisenhower HS.  After two years, in 1959, Joe Russell became the head coach.  He is believed to be the first African American to lead a predominantly white school’s program.  Under his leadership, Eisenhower was 171-99 with four Capital Conference titles, two Decatur City titles, and the 1969 Carbondale Holiday Tournament title.  His overall record was 352-256 (not including Mounds as those records are not available).  Russell finished his career as an assistant professor of physical education at Bradley University.