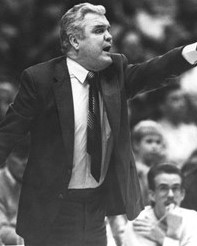 Biography: After his graduation, Gene Sullivan served two seasons at his alma mater, Notre Dame, as freshman coach. He then began a 10-season career, 1957-67, as head coach at (Wilmette) Loyola Academy where he compiled a record of 295-148. Sullivan returned for four seasons as assistant varsity coach at Notre Dame under Johnny Dee. The Irish won at least 20 games and gained post season tournament appearances each year. Sullivan moved on to DePaul where he served as athletic director and helped Ray Meyer build the Demons into a national power. In 1978, Sullivan became Athletic Director at Loyola University and in 1980 became head basketball coach. Sullivan led the Ramblers to a 149-114 record and a 72-39 record in the Midwestern Collegiate Conference. Twice Sullivan has won the regular MCC season championship. In 1985, Loyola reached the round of 16 in the NCAA Tournament before giving defending champion Georgetown all it could handle before bowing out.  Loyola University inducted Gene into the Rambler Hall of Fame in 1998.  Coach Gene Sullivan died on February 21, 2002, at the age of 70.