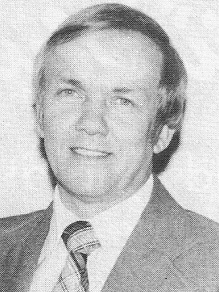 Biography: Keith Baldwin is known to Illinois basketball fans for his color commentary of three Illinois High School Association basketball tourneys on the television network. Opposing coaches, players, and fans knew of Baldwin long before. They knew of his teams at Rossville High School and Watseka High School for their thorough preparedness which was quite evident by their play. Baldwin, a three-time IBCA District Coach of the Year, complied an enviable record at Rossville High School, with a 26-3 record during his final year there and won three conference and three other tourneys before moving to Watseka in 1971.  His 10-year record at Watseka is 196-91. His overall varsity coaching record is 329-164.  At Watseka, Baldwin’s warriors claimed two Wauseca Conference titles, six Iroquois County crowns, 10 IHSA Regional championships, 4 IHSA Sectionals and a third-place finish in the IHSA Class A State Tourney. His 1975-76 Watseka team won a school record 27 games and his 1978-79 club set a school mark of 16 straight wins. In 1979-80, Baldwin was selected as the Class A North Coach for IBCA All-Star game and his North Squad posted a 106-91 triumph at Bradley’s Fieldhouse. Baldwin was the Champaign News-Gazette’s Coach of the Year in 1976. He has served on the IBCA Board of Directors. Besides his basketball duties, Baldwin also served as Watseka athletic director, assistant principal, and principal.