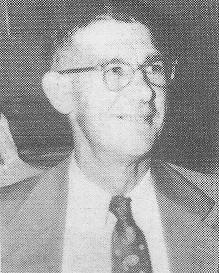 Biography: William A. “Barney” Dudley coached basketball for 21 years at Riverside-Brookfield HS.  It was his only job after graduating from Northern Illinois University in 1934.  Sadly, William died in January of 1955.  Several years later, the RB gym was named for him.  His son, Bill kept the family name alive with a standout career at RB before entering coaching himself as a collegiate football coach.