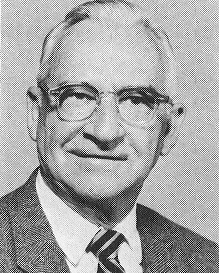 Biography:  Television could well be responsible for former Georgetown Junior High School (North Pekin) basketball coach George Kidd being inducted into the 1976 IBCA Hall of Fame.  Kidd serve as head basketball, basketball and track coach from 1945-1951 at Wapella HS after stints at Cuba HS and Maroa HS.  In 1951 George became manager of a Pekin movie theater.  But television soon had its effect on the movies.  In 1954 George returned to teaching as the Physical Education instructor and coach at the local junior high.  He brought much success to the North Pekin school during the 13 years before retiring.  This included a 4th place finish in the state tournament.  Many of his athletes went on to greater heights at Pekin HS including all-state player Fred Miller, the mainstay of the 1967 Pekin HS state championship team who went on to a three-year career at the University of Illinois.