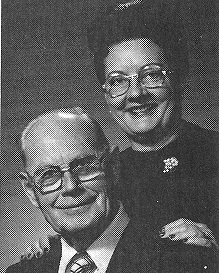 Biography:  Francis S. Landon and his wife Louell had watched Lockport basketball for 73 years upon their IBCA Hall of Fame induction in 1976.  Mr. Landon played basketball at Lockport from 1923-27 and has had a season ticket since 1928.  He missed only the time that he was in the service from 1943-45, although he did return in 1945 in time to enjoy the end of that season.  Mrs. Landon attended Lockport HS from 1929-33.  She received her introduction to Porter basketball when in 1930 she received a season ticket from her brother as a Christmas present.  The Landons ranked as the senior members of the Lockport Central season ticket holders for many years.  Francis passed away before his beloved wife,  Louell who passed away on August 29, 2011 at the age of 96.