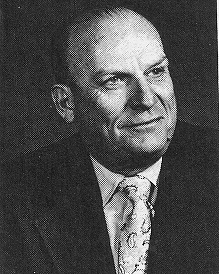 Biography:  Clyde Peterson served Harlem HS of Loves Park well.  After coaching stints at Winslow, Polo and Sault Ste. Marie (MI), Clyde joined the Harlem staff in 1946 as head football coach, head basketball coach, and head track coach all with only one assistant across the three sports.  Additionally, he served as the school’s athletic director.  Peterson expanded Harlem’s program from three to nine sports and increased the staff from 2 to 23.  He is most responsible for guiding Harlem into the Big Nine conference.  His basketball coaching record was 147-97.  He played a big role in shaping the athletic facilities for Loves Park’s other high school which opened in 1975.  Clyde is a graduate of Illinois Wesleyan and the University of Illinois.  Clyde Peterson passed away during 1992.