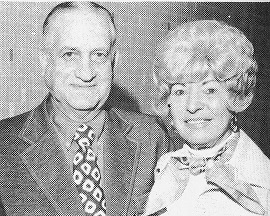 Biography:  In the Bloomington-Normal area, Denzal and Virginia Burgess are basketball royalty.  For several decades, the couple were regular attendees at Illinois State University and Bloomington High School games.  Denzal rarely missed a game beginning in 1927 with Virginia joining him in the stands before their marriagne in 1939.  They regularly saw 100+ games per season.  They attended as many as 13 tournaments each year.  They never seemed to tire of the game.  Denzal himself was a basketball player at old Ellsworth High School and with the semi-pro Ellsworth Clippers team.  That team won a state title in 1931-32 and placed second in 1941-42 after which Denzal ended his 22-year career with 715 games played.  Virginia Burgess passed away on July 12, 2013; followed by her husband on November 24, 2016.