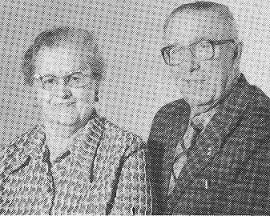 Biography:  At the time of their induction to the IBCA Hall of Fame in 1977, Augie Jacobs (age 75) and his wife Theresa (age 70); just completed their 40th year of following high school basketball in Illinois. This started in 1936 when Sam Storby moved to Proviso High School from Quincy. In their years of chasing around the old Suburban League, they’ve watched the game of basketball develop through the mastery of such coaches as Storby, Vopicka, Ziebell, Sloan, Burmaster, Millikin, Kraft and many others. Augie retired from Commonwealth Edison’s construction department in 1968 after 45 years of service to the company. This did not slow the determination of the couple to follow their team. When the district split Proviso into two schools, the Jacobs followed the East campus teams and were thrilled as they watched the Pirates win two state titles.  Augie Jacobs passed away on May 11, 2014.