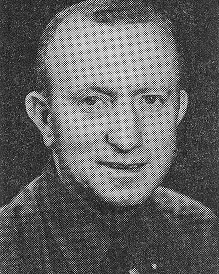 Biography:  Before Paul Reatherford started the careers of many Peoria area basketball players, he was enlisted in the US Navy during WWII and proudly served in the Pacific theater. Paul helped organize the Peoria Salvation Army Biddy Basketball program in the 1950’s. In 1953 his team won the Biddy Basketball championship held at Scranton, PA. In 1970, he again turned his hand to organizing. This time it was the Peoria Youth Basketball League. This league numbered more than 20 teams and 220 boys each year. Ages for the players was from 9 to 14 with the league’s theme “everyone plays” ; “participation is more important than winning.” Paul was honored by the Peoria Advertising and Selling club in 1976 as the winner of the “Neve Harms Award for Meritorious Service to Sports.” He served as a consultant and furnished prototypes of his basketball program on many occasions. Paul particularly supported the coaches and athletes at Peoria Spalding, Peoria Bergan (and Peoria Notre Dame after their merger). Throughout, along with fellow inductee Lefty Tyler, Paul was very active in the Peoria Old Timers Organization. Paul passed away on August 2, 2012 at the age of 86.