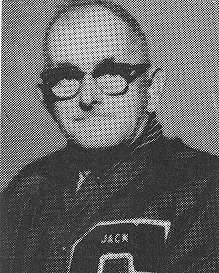 Jackson (Jack) Hill moved to Chrisman as a four-year-old after his mother’s death.  It was the start of a love affair which continued through his IBCA Hall of Fame induction in 1978.  Jack attended Chrisman schools and remained a rabid Chrisman Cardinal fan long after his graduation.  He usually was in attendance at home games and frequently rode the team bus to away games.  He also closely followed the University of Illinois and the Chicago Cubs.  In the Chrisman area, Jack is thought to be one of the greatest basketball fans ever.