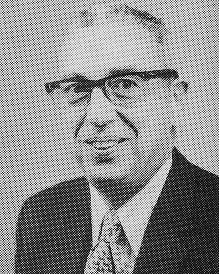 Frank Moran has been a true friend of basketball to the state of Illinois.  Before his job took him to New Orleans in the late 1970’s, Frank was an IHSA official.  He was the charter president of the South Suburbs Officials Association.  Moran served as a member of the basketball rules committee for five years.  He also served the IHSA as an interpreter.  Frank is credited with designing the modern system of statistics for the state finals games.  Frank Moran passed away on Decembr 12, 2011.