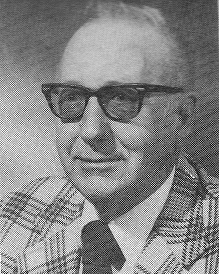 Biography:  Floyd Hampsmire first volunteered his services as official scorer for the Barry Tigers in 1955-56.  He continued in that capacity for 50+ years and nearly 1,000 games.  During the first 3 years, Floyd also kept score for the junior varsity and junior high teams.  This meant that many weeks he was working the score book for at least 4 nights per week.  Hampsmire decided to limit his scorekeeping to the varsity teams after those three seasons but took on the additional responsibilities of notifying the various media of the outcome of Barry home games.  Floyd volunteered his time and effort for various tournaments hosted by the Barry schools including the Pike County Tournament, Wenois Tournament, Freshman Invitational, IESA Districts and the annual 6th Grade Invitational.  Floyd was also a regular at the IHSA state finals.  Floyd Hampsmire passed away on October 25, 2011 at the age of 92.