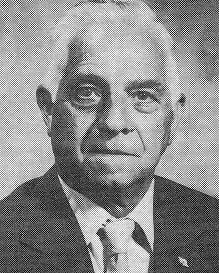 Biography:  Barry High school dedicated its gymnasium in 1950. Running the foul panels in that first game was Meredith “Skeet” Hull. Two years later, Hull became the official timer and held that position on the bench for over 30 years. In his early seasons, he also served the junior high. In addition to regular season games, he has served as timer for various tournaments hosted by Barry including the Pike Country Conference, Wenois, freshman invitational, IESA District and the annual Barry sixth grade invitational. A retired postmaster, Hull lived in Barry beginning in 1960, graduating from high school before attending the Gem Business College in Quincy. A World War II Army veteran, Hull served in the Pacific theater and was awarded a Bronze Star for his meritorious service to our country.  “Skeet” passed away on August 11, 2008 at the age of 94.