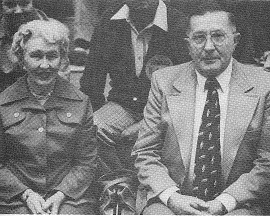 Biography:  Mr. and Mrs. Ray Hoerr of Pekin were the epitome of a Pekin High School basketball fan, or maybe just basketball fans. At the time of their Hall of Fame induction in 1982, the Hoerrs had been season ticket holders for Pekin games since 1927 and kept the tickets to show you. They were not just content in attending home games, the Hoerrs have been on the road with Pekin many times.  The annual Pekin Holiday Tournament is made up of 23 games before it is completed. The Hoerrs saw every game of the first 18 tournaments. Although not confirmed, there remains a rumor that the Hoerrs may have had to open Christmas presents under the Pekin basket to attain that record.  They thrived on the success of the Pekin teams.