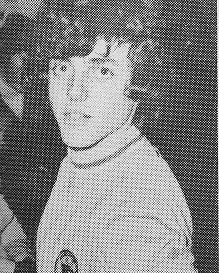 Cliff Stein began his association with basketball at a young age.  After losing his father to a heart attack at the age of 10, Cliff was often at the high school gym, shooting a basketball, listening to the coaches, and running errands for the team.  Cliff developed into a standout player as an 8th grader.  Unfortunately, he was diagnosed with the same heart condition as his father.  Although he never played basketball again, he organized a group of young people to perform ball-handling demonstrations for crowds throughout the southern Illinois area.  They were known as the Zips.  The Murphysboro coach at the time, Tom Ashman created a scholarship that bore Cliff Stein’s name and made sure that all players who played for him at the high school knew about Cliff Stein.  Cliff died young on October 8, 1976 at the age of 18.