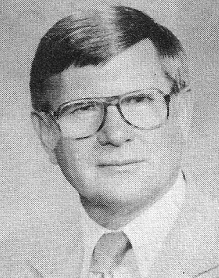 Biography:  Lavere L. (Liz) Astroth was the fourth executive secretary in IHSA history. He joined the IHSA administrative staff in 1967 as an assistant executive secretary in charge of the officials’ department and boy’s athletic activities in football, soccer, basketball, wrestling, baseball and track. He remained in charge of boys’ basketball and track once he was promoted to the top office. A native of Roxanna, Astroth attended Wood River High School where he played football and basketball. He received his bachelor’s, master’s, and advanced certificate degrees from the University of Illinois. A member of Fighting Illini football and baseball teams, Astroth was the quarterback on the immortal Bob Zuppke’s final team.  Astroth could well make the Hall of Fame as a coach compiling a record of 124-50 at Hoopeston and Urbana. His four-year mark at Hoopeston was 98-8. His 1947-48 team won 31 straight before suffering its first loss in the sectional finals. Astroth could make the Hall of Fame as an official. Astroth, as a certified basketball official from 1954-74 officiated an average of 40 high school and college games a year, including five IHSA Regional assignments. As a friend of basketball, he is responsible for the organization and administration of the IHSA basketball program. Astroth co-chaired the special 9-member committee which culminated in the adoption of the IHSA two-class basketball tournament. He implemented a relationship with the Illinois Basketball Coaches Association which gave the IBCA the opportunity to recommend coaches for the basketball advisory committee. Liz Astroth died on April 11, 2017 at the age of 89.