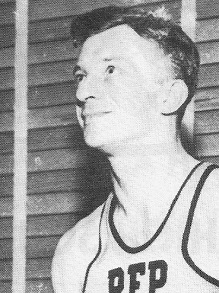 Biography:  Eddie Kolar and his brother Otto are synonymous with the greats of Chicago area basketball. They played major roles in helping the sport become popular in the Midwest. Eddie played basketball with the House of David touring team from 1930-34. Eddie Kolar, also played with Sheboygan in the Midwest Professional league before joining the Chicago Duff’s from 1935-38 and playing with a championship team. Eddie Kolar served as director of recreation for the Clyde Park District from 1948-74. Eddie helped hundreds of young boys become men through athletics. Playing at Cicero Stadium in leagues organized by Eddie and run by him was the goal of nearly every boy growing up in the 1950s and 1960s in Cicero. Many aspiring young players made a ritual of playing “HORSE” with Eddie in the late evening after the stadium closed. Such great Morton stars as Ron Sobie, Ed Matousek, Mark Klein, Bill and Joe Hapac, Chet Strumillo, Ed Makovsky, and Bob Lutta were touched in their careers by Eddie and Otto. The IBCA certainly fills a void with the introduction of Eddie Kolar into its Hall of Fame.  Eddie Kolar passed away on March 5, 1998.