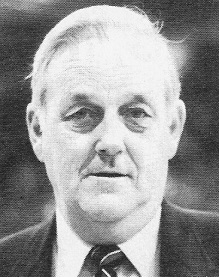 Biography:  Bill Kolloway is a unique individual. An avid supporter of basketball in Chicago’s South Suburban area for more than 30 years, Kolloway, a graduate of Thornton High School where he was an outstanding athlete, has developed a most difficult problem. He followed and supported the great Thornton teams of the 50s and 60s, the Thornridge teams of the 70s and now also follows and supports the Thornwood teams. Kolloway has season tickets at all three schools and each game night must decide which game he’ll attend. Sometimes he leaves at halftime of one to watch the second half of another. In his capacity with Bauer Buick of Harvey as sales manager and president of Bauer Leasing, Kolloway has provided cars for all three teams while they were participating in the IHSA Tournaments. Many times the head coaches at the three schools were provided cars for their own use during the entire month of March. Kolloway has attended many IBCA Hall of Fame inductions in addition to providing blocks of advertising whenever any person from the South Suburbs was inducted. He has supported coaches and is always positive in his relations with high school athletics.