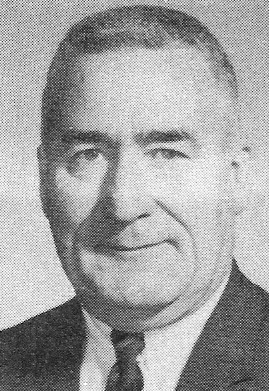 Biography:  John Malvern Bland had been a scorer for Shabbona High School for 28 years leading to his HOF induction. Bland retired from teaching and coaching twice with a total of 38 years. Bland was the teacher of all eight grades in a one-room schoolhouse from 1934-37 at Lacey Rural School. He later introduced grade school sports. He coached football, basketball and track at Batavia High School during the 1943-44 school year and the next year at Earlville. In 1949 he moved to Shabbona where he coached seventh and eighth grade basketball, baseball and introduced track. For many years he drove the bus for all Shabbona Grade School games and many of the high school games. In addition, he washed all towels and uniforms, mending them for the teams, He became a member of the Illinois High School Officials Association in the early 1940’s. He was one of the first recipients of a 25-year service pin by the National Federation of High School Associations when the award was established. Bland organized and coached 17 years in the Shabbona Little League.  John Bland died in 1990.