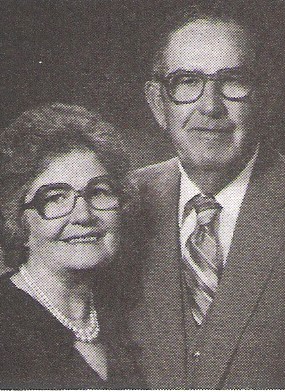 Biography:  The basketball story of John and Ann seems like something that we would read about as an adventure tale.  They lived on a farm 4 miles from Cornland.  As staunch followers of the local high school in Mt. Pulaski, they rarely missed a game.  In 1934, when they couldn't get to town to get a paper to see how the Hilltoppers had fared in the Pontiac Tournament due to snow, they donned their heavy coats and walked into town to buy a newspaper.  On several occasions, they hitched the horses to pull their car over the graveled road up to the paved one so that they could get to a game.  When their daughter was a cheerleader, a snowstorm was so bad that she was the only member of the squad who made the game.  In 1961 for a game in Shelbyville, John and his carload of fans was the only car to make it.  While their 3 daughters were in school, the Brysons were always there with a carload of teenaged fans.  Sometimes, when the weather was bad, the Brysons had the kids stay overnight to stay safe.  There are many more stories about their faithful attendance.  John died on October 22, 1992 at the age of 82.  Ann died on June 23, 1993 at the age of 77.