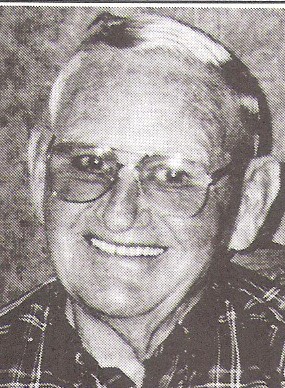 Biography:  Griswold turned 80 in March of 2000 and still was an active and loyal fan of Cissna Park High School. He was a fan since moving into town in 1967, which closely coincided with his son-in-law Larry Hofbauer becoming an assistant at Cissna Park in 1966. A year later Hofbauer became the head coach.  Even after Hofbauer left the teaching and coaching field after a decade of huge success, Griswold remained an ardent fan as grandsons Jeff and Todd starred for the Red Devils in the early to mid-1980s. Whether it was a junior high or high school boys' game or girls' game - basketball or volleyball, home or away - Griswold was found prominently in the Cissna Park crowd urging his team on to success.  When Cissna Park and Crescent-Iroquois formed a co-op in 1997, Griswold continued to support the Timberwolves. His cycle became complete as granddaughter Sarah was serving as the seventh grade girls basketball coach in Cissna Park in 2000. Harold died on December 1, 2003 at the age of 83.