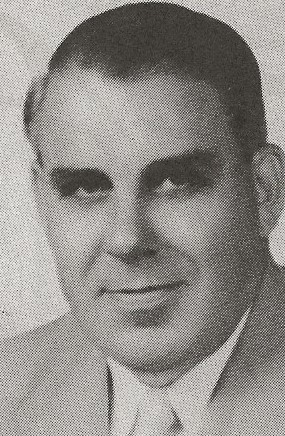 Biography:  A cheating basketball timekeeper so incensed the late Ralph “Bus” Nevinger that he founded an electric scoreboard company in Greenville-the Nevco Scoreboard Company, which has outlived its founder.  Nevinger grew up in Greenville and was a starter on the 1923 team that finished fourth in the state. He scored 15 of the Comets’ 33 points in two games before going to Rice University on a basketball scholarship.  In the early 1930's scores and time were kept by hand, sometimes affording the kind of bias that spurred Nevinger to action. He crafted the cabinets of white oak and inserted electromechanical timers and scoring numerals and sold his products to schools and small sports venues at a price of $200-$300 delivered. The first Nevco scoreboard was sold to Williamsville High School.  The Illinois high school basketball tournament was an event attended by Nevinger for many years. He hosted a hospitality suite at the old Inman Hotel in Champaign during many of those years.  Nevinger died on March 14, 1999 at 93.