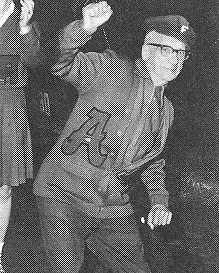 Unfortunately, Jack Flannery passed away in 1971 and never knew of his induction into the IBCA Hall of Fame.  Prior to that, he was one of the greatest fans basketball has known for 47 years.  A native of Aurora, Mr. Flannery was a self-appointed cheerleader for the Aurora teams and for all the northern teams at the state tourney.  He always wore a red shirt and wore blue accessories when cheering for West High and black accessories when cheering for East High.  When they played each other he would wear one black sock and one blue, so as not to favor either side.  Jack generally sat with the cheerleaders and helped them generate spirit.  He was tremendously proud of the blankets and sweaters presented to him by many of the northern schools.