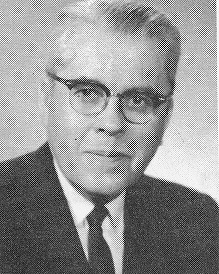 Biography: Milt Sprunger was the assistant executive secretary of the IHSA for 21 years.  He handled the registration and training of athletic officials, appointed basketball tournament officials, conducted basketball rules meetings in Illinois and 15 other states, and was editor of the Illinois Scholastic.  Milt was also the author of So Now You’re an Official, and the Basketball Handbook.  He was a member and assistant secretary of the National Basketball rules committee from 1960-1964.  Milt was awarded the Certificate of Merit by the National Federation of High School Athletic Associations.  Milt was born in Indiana and attended Bluffton College and the Ohio State University.  After retirement, Milt worked as a “gentleman” farmer in Washington, IL.