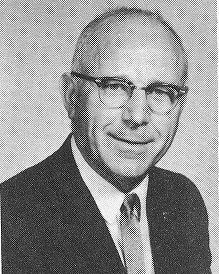 Aubra Williamson left an excellent career behind him when he passed away on January 29, 1972.  His coaching record in both football and basketball was outstanding while working at Pontiac HS.  He took Pontiac to the state tournament in 1946. Aubra was best known for his outstanding leadership of the Pontiac Holiday Tournament which he managed for 9 years.  This is still considered one of the premier holiday tournaments in the state.  He attended Milford HS and Illinois Wesleyan University.  During his coaching career, his teams won 19 Corn Belt Conference titles.  At the time of his death, he was the assistant superintendent of Pontiac HS.