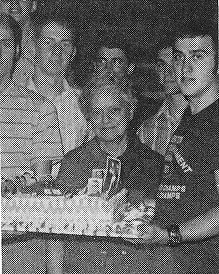 Biography:  Mrs. Jessie Carter is one of the south’s great basketball fans.  She missed only a few games involving her Benton Rangers dating back to the 1920’s.  She became a real fan when basketball was just beginning as a high school sport.  Jessie and her husband attended the games together from 1921 to 1953 when a heart attack forced him to stay home.  He would anxiously wait for Jessie to return to give him the details of the game.  For the last 40 years leading to her HOF induction (1934-1974), she presented the team with a large cake before their regional games.  While she has been honored many times by the great fans in Benton, Jessie has said that her induction into the IBCA Hall of Fame was a fitting climax to her career as one of the south’s top fans.