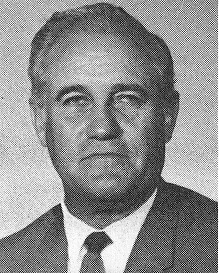 Biography:  Harry Gaines was a coach at Mattoon High School for 37 years, athletic director for 14 of those years.  It was under Gaines’ guidance that the Mattoon Holiday Basketball Classic came into existence.  Gaines also officiated basketball from 1946-1956, working holiday tournaments at Paris, East St. Louis, Centralia, and West Frankfort in addition to working college games from 1948-1956 highlighted by the NCAA Tournament in Kansas City.  He was named the Illinois Athletic Director of the Year in 1972 and the football field at Mattoon HS is named in his honor.  Gaines was one of the original 15 members elected to the Mattoon HS Hall of Fame in 1974.  After education, Harry became the manager of the Cross-Country Mall in Mattoon.  Harry Gaines passed away on April 7, 1996.