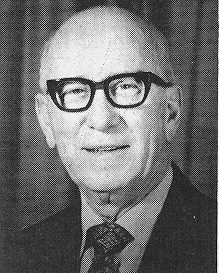 Biography:  Neil Kane came to Decatur from Bloomington and saw his first Decatur HS basketball game in January of 1927.  Kane watched Decatur annex four state crowns and was on hand when the Canton team (also inducted into the IBCA Hall of Fame in the same year of 1975) lost to Ashland, Ky and settled for runner up in the national high school tournament.  Kane became friends with famed Decatur coach Gay Kintner and proudly says he witnessed the first game ever played in the Kintner Gym at Decatur HS in 1940.  For 35 years, Kane occupied the same seat in the gym and was awarded a similar seat when the 1975 season opened in a new gym.