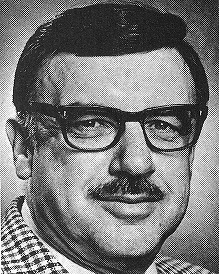 Biography:  For 20+ seasons, Lawrence Benedetto served St. Edward HS of Elgin as its basketball scorekeeper.  St. Edward AD, says of Benedetto, “His conscientious work has helped sustain our basketball program.  If he were not around, my job would be a lot more difficult.”  Lawrence has missed very few games whether regular season or tournament.  If he did miss a game, he always provided a capable replacement.  Many times, he even drove players to the away games.  For all of this, Lawrence worked his “hobby” around his job as foreman for Commonwealth Edison.  Lawrence passed away on September 14, 2001 at the age of 80.