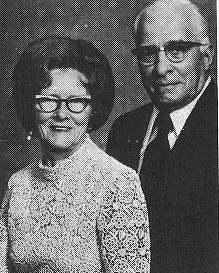 Biography:  To say that Francis and Frances Coutts were avid supporters of LaSalle-Peru HS basketball would be an understatement.  In the early 1970’s the LP coach received a phone call seeking the score of an afternoon Cavaliers’ game.  While not unusual, the call was received in the coach’s Pontiac hotel room during the annual Holiday tournament and the call originated from Florida.  The Coutts could not wait to get the score.  They rarely missed a game, home or away, during 25+ years of team support.  Not only do they attend games, they attend nearly any event that involves the youth of the LP communities.  Additionally, they followed and kept track of graduated players and their progress in life. Mr. Francis Coutts passed away on February 28, 1995.  He was preceded in death by his wife, Frances, who passed on December 11, 1980.