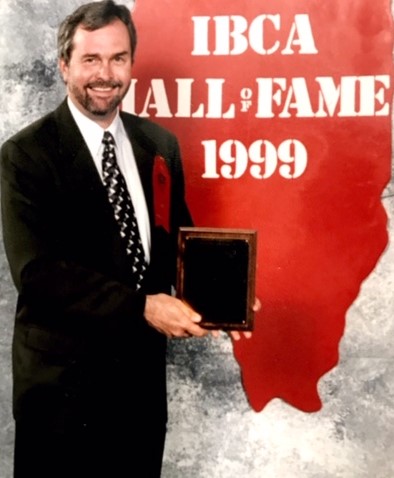 Biography: Few people get a chance to do exactly what they want to do with their lives.  Mike Moyers is one of the lucky ones.  Listening to the voices of Jack Buck and Harry Caray as a kid, Moyers knew early on that he wanted to be a play-by-play announcer—a craft he began working on at the age of seven.  His first chance at sports broadcasting came in 1979 for WTAD. While working with Jeff Dorsey, Moyers took his partner’s advice and worked on his voice, diction and phrasing. During the decade of the 80’s Moyers did play-by-play of everything imaginable—including girl’s softball and bowling.  When the opportunity to broadcast soccer at WTAD, Moyers embraced the sport and became one of the best in the state.  He was recognized as the Media Man of the Year in 1985 by the Illinois High School Soccer Coaches Association—the same year his local radio show was named as the best national electronic coverage by the Professional Bowlers Association.  In 1987 Moyers became WGEM’s anchor play-by-play voice for the Quincy Blue Devil Basketball program.  After leaving WGEM in 1990 Moyers and new color man Jeff Hibbert were hired to broadcast the Devils on WQCY FM.  Eight years later the Moyers and Hibbert team moved to KZZK FM– and the listeners and sponsors followed.  Retiring from the broadcasts in January, 2002, Hibbert and Moyers left behind over 400 Friday and Saturday nights of Blue Devil excitement—and hundreds of friends and memories.  During his 23-year broadcast career Moyers amassed over 1500 play-by-play broadcasts—including 33 I.H.S.A. state tournaments in various sports.   In 1999 Moyers was inducted into the Illinois Basketball Coaches Association Hall of Fame and, in 2007, was inducted into the Quincy High Sports Hall of Fame. Moyers retired in 2017 after serving as the Senior Vice President of the STARadio Corporation for 18 years.