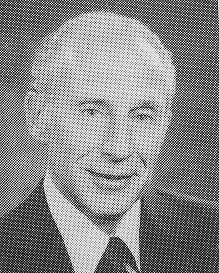 It’s just possible that at the time of his IBCA HOF induction in 1978, Larry Stewart, the general manager of Champaign radio station WDWS, had seen more University of Illinois football and basketball games than anyone else.  Larry, known for years as, “The Voice of the Illini”, began broadcasting Illinois basketball in 1947, when he graduated from the school.  Since that time, it’s figured that he has broadcast over 2,000 U of I and high school games.  For many years he was the play-by-play man for basketball and football networks for the Illini.  Stewart was the recipient of an honorary “I” from the University of Illinois Men’s Association for his Illini broadcasting contributions.  Larry Stewart died on September 28, 2009 at the age of 87.