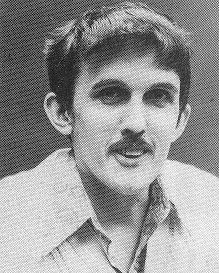 Biography:  Don Hazen covered high school basketball as a member of The Joliet Herald-News staff beginning in 1964, serving as sports editor beginning in 1972. He served as president of the Illinois Association Press Sports Editors. “Basketball is My Thing” Hazen said of his favorite sport. Many players and teams have cavorted before Hazen’s watchful eyes. In selecting his favorite high school team Hazen points to the (Dolton) Thornridge High School championship team and the 104-69 defeat of Quincy High School in the 1972 title game. To pick out a special game Hazen again turned to the Thornridge team in 1971. “There were 5,000 screaming nuts to watch Thornridge nip Joliet Central 66-63 here in Joliet in the sectional. That game is what Illinois High School Basketball is all about.”  Don Hazen died on August 25, 2004.