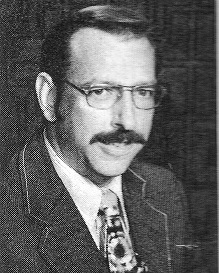 Biography: Lorn Brown was the sports director for WRAU-TV in Peoria at the time of his induction in 1973.  He attended (Chicago) Mt. Carmel HS and Illinois Central College.  Lorn did prep sports broadcasting for many years and was one of three announcers for the Illinois Bell TV at the state tournament in 1963.  He also did Bradley University play-by-play for 4 years, spent 7 years as TV sports announcer in Springfield, and 6 years as Radio-TV sports announcing in Peoria.  He was the first announcer of a televised Illinois State University basketball game in 1972.  Lorn spent time announcing the Chicago Bulls and the Chicago White Sox where he paired with the legendary Harry Carey.  At the end of his career, Lorn lived in Las Cruces, NM where he announced games for New Mexico State University.   Lorn Brown passed away on June 24, 2010.