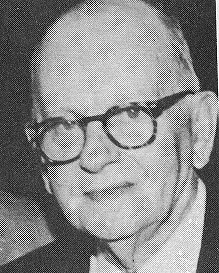 Howard Millard was the sports editor of the Decatur Herald for 38 years where his column, “Bait for Bugs”, was very popular.  Howard graduated from Illinois Wesleyan in 1917 and served in WW I for 2 years before starting to work with the Herald.  Howard was about as close to being a legend in his own time as a sports writer can be.  He was a devoted friend of Gay Kintner and officiated many games as a partner with Fred “Brick” Young in the state finals.  Howard passed away on October 23,1961 at the age of 70 in Fresno, California where he had located after his retirement in 1958.