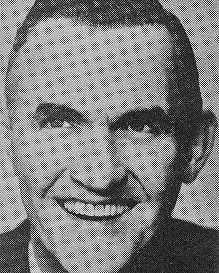 Biography:  Jack Drees gave the play-by-play of the inaugural telecast of the state finals in 1952.  For many years thereafter, Mr. Drees became known as the television voice of the Illinois State Basketball Finals and a recognized authority on the outstanding teams and individuals to appear in Champaign.  Additionally, Jack was known nationally for his sports announcing prowess.  Jack passed away on July 27, 1986.