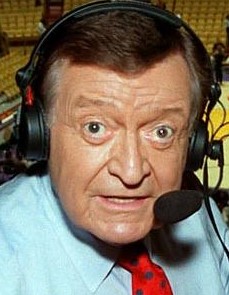 Biography:  Chick Hearn is one of the outstanding voices in sports broadcasting.  As an outstanding radio and television announcer in central Illinois, Chick worked the state basketball tournament for many years before moving westward to become the long-time voice of the Los Angeles Lakers.  Chick’s colorful presentations have made him popular on a national level.  Chick Hearn passed away on August 5, 2002.