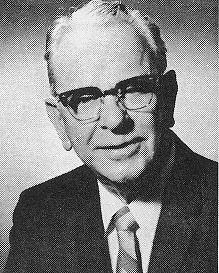 Biography:  Edwin Jacquin was one of the great names associated with the Illinois State High School Basketball Tournament.  As the sports editor for the Champaign News Gazette from 1925-42 he was instrumental in starting the paper’s All State Team.  Eddie worked hard to glamorize the state tournament for the fans.  He was given the credit for naming the 1933 Thornton State Champions as “The Flying Clouds”.  Eddie also worked as an official for 15 years and was the sports editor for the Peoria Journal Star and was managing editor of the News Gazette from 1942-1952.  Eddie attended Bradley Academy and the University of Missouri.  After retiring from the newspaper industry, Eddie lived in Alton and was a press relations consultant.  Edwin passed away on July 1, 1982.