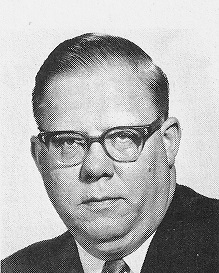 Biography:  David Condon attended the University of Notre Dame and began working with The Chicago Tribune after leaving the army in May of 1944.  For many years he covered both the Illinois and Indiana state tournaments.  David found time to cover the Fenwick junior tournaments, the St. George Catholic senior tournaments, the revival of the University of Chicago Stagg tournament and the Chicago Public School tournaments.  David’s favorite Illinois state tournament game was the 1945 game won by Decatur HS over Galesburg 73-72—the lead changed hands 33 times during that game.  David started the Chicago Tribune All Star teams and became the 7th conductor of the paper’s “In the Wake of the News” column.  A great writer, David’s columns achieved a wide following of readers.  David Condon passed away on December 4, 1994.