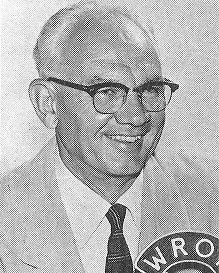 Biography:   April 27, 1955 was proclaimed “Morey Owens Day” in Rockford and Loves Park in a fitting tribute to a veteran sportscaster, Maurice Owens.  Morey had retired after spending 29 years behind the WROK microphone describing the action of the cities’ athletes.  At a testimonial dinner on May 7, 1967 Owens was presented with a plaque designating him as “Rockford’s All Time Broadcaster”.  Owens’ impartiality is evident by the presentation of appreciation plaques by booster and fan clubs from East, West, Auburn, Guilford and Boylan High Schools.