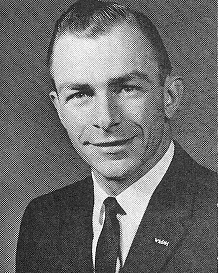 Biography:  Ken Wooddell was completing his 26th season of basketball play-by-play for Mattoon radio stations WLBH at the time of his induction in 1975.  Ken had been behind the microphone for more than 1,350 games, mostly for Mattoon High School but also for other area high school and college games.  Wooddell had broadcast state tournament games from Huff gym and from the Assembly Hall.  Although Ken became the vice president and AM manager at WLBH, he continued to do the play-by-play with the state tournament games as his favorites.