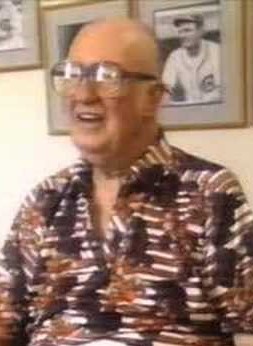 Biography:   WGN’s Jack Brickhouse had a method in his madness when at age 18 he became the youngest sports announcer in the nation for station WMBD in his hometown of Peoria, IL.  While at WMBD, Jack sold the station on the idea of basketball broadcasts so he could follow Bradley’s Braves on several coast-to-coast trips.  Since joining WGN, Brickhouse has announced nearly every sport and he has done some political broadcasting.  Probably best known as the Chicago Cubs television broadcaster, Jack was honored in 1952 for completing 20 seasons of Chicago Bear games on radio.  In 1983, he was awarded the Ford C. Frick Award by the Baseball Hall of Fame.  Jack has also served as vice president and manager of sports for the WGN Continental Broadcasting Company.  The legendary Jack Brickhouse passed away on August 6, 1998.