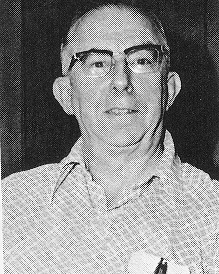 Biography: James Caviezel, sports editor of The Daily Leader in Pontiac, had covered Illinois basketball for 32 years prior to his 1976 Hall of Fame induction.  Jim joined The Leader in 1942 as a sports writer, becoming the sports editor in 1945.  From 1943-1976, Jim served in an advisory capacity of the Pontiac Holiday Tournament and from 1971-76 as the publicity director and director of press relations for the same event.  Caviezel has also covered all high school sports as well as college football and basketball.  Jim wrote a weekly “Speaking of Sports” column which featured many of the state’s outstanding basketball coaches of the 40’s, 50’s, 60’s and 70’s.