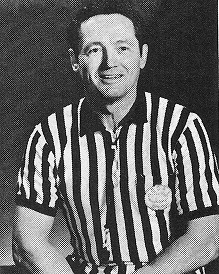 Biography:  Good athletes often excel in more than one sport. Harry led a Lewistown, Ill. high school basketball team to a berth in the Sweet Sixteen Tournament at old Huff Gymnasium in Champaign. During the war, he played baseball for the Pensacola Naval Air Station in Florida, and the Iowa Seahawks Navy basketball team before heading for Bradley. Playing for three Bradley University basketball teams, he was renowned for his speed on fast breaks and was a prolific scorer at guard, often in double figures, as A.J. Robertson built his post-war teams. After his playing days, for 25 years Harry Wilcoxen traversed basketball floors throughout the state as an IHSA official. Many coaches considered him the “premier official in the Peoria area.” Wilcoxen worked many IHSA regional, sectional, and super-sectional games in addition to 2 IHSA state tournament assignments. For 13 seasons he served as a Missouri Valley official. In 1968 and 1970 Harry worked two NCAA small college finals. In 1971 and 1973 he worked the NCAA regional finals. In 1971 Harry was the alternate official for the NCAA finals in Houston. Harry was well known in the central Illinois area for mentoring numerous young officials and coaches as they were beginning their careers.  Harry is a member of the Bradley University Hall of Fame and the Greater Peoria Sports Hall of Fame.