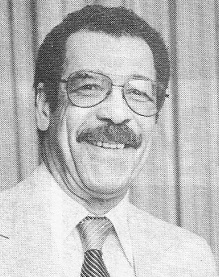 Biography:  Before becoming a leader on the basketball courts, Henry was a leader in the skies as a member of the famed Tuskegee Airmen during WW II.  Henry Bowman, like his usual officiating partner Bob Wright, began his basketball career in Illinois at Chanute Air Force Base in Rantoul. Bowman started in 1959 and until March of 1972 worked an average of 105 basketball games each year. Like Wright, Bowman’s assignments included the entire gamut from grade school through college. Bowman’s IHSA tourney service saw him whistle 42 district games at Onarga, Sheldon and Armstrong. Regional tourney games numbered 71 at Tuscola, Casey, Hoopeston, Watseka, Bradley, Park Forest, Crete-Monee, Bloom, Thornridge, Somonauk, and Quigley South. Sectional games at Olney, Peoria, Hinsdale, Normal, Dixon, and Waukegan totaled 18. Super-sectionals under Bowman’s watchful eyes were at Hinsdale, Evanston (twice), Crete-Monee, and Aurora East. State Tourneys in 1969-70-71 had Wright racing up and down the Assembly Hall Court. In all, he officiated 142 IHSA tourney games. Bowman was justly proud of being the first black official assigned to the IHSA state finals. Henry was also one of the first African American officials in the Big Ten Conference.  Bowman officiated the Illinois State AAU tourney in 1965, 1966, 1967, and 1968. Bowman was floor official for the National Wheelchair Basketball national championships in 1960, 1961, 1962, 1965, 1966, 1967, 1968, 1969, 1971, and 1972. Bowman accompanied the United States Wheelchair team to the international games at Stake-Mandeville, England in 1961, 1962, and 1963 where he was an active basketball official. Bowman was a state baseball final umpire in 1965 and 1966 and was Big Ten football official for five years.  Henry Bowman died on September 16, 1995.