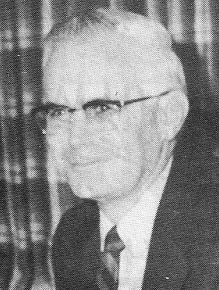 Biography:  Officials, whether they like to admit it or not, sometimes can be affected by a crowd. That wasn’t one of Bill Filson’s problems because he got an early background as a high school athlete. Filson was a tight end on an Austin High School team which beat Leo for the Chicago City Championship held at Soldier Field. The crowd was the largest in Illinois prep history – 110,000. Filson began officiating while still an undergraduate at Illinois Wesleyan. By the time of his graduation he was regarded as one of the top officials in Central Illinois. He was always in demand for the games which paired intense rivals. Filson took on an active part in the activities of the Bloomington-Normal Officials Association and its Hall of Fame. He spent 11 years as Commissioner and Assignment Chairman of the College Conference of Illinois and Wisconsin. Filson, the superintendent of the Illinois Masonic Children’s Home in LaGrange, served 17 seasons as a football official in the Big Ten and worked the Rose Bowl in 1968 and 1974. Illinois Wesleyan Athletic Director Emeritus Jack Horenberger called Filson “a credit to the history of officiating.”   Bill Filson died on July 31, 1996.