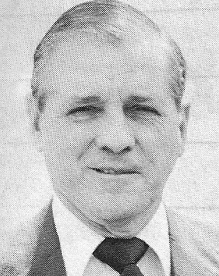 Biography:  Tony Tortorello ended 32 years of basketball officiating at a Class AA Regional at Zion in 1978. For 31 of those years Tortorello was an IHSA official. It was his 21st IHSA Regional. Tortorello also worked 15 IHSA Sectionals, 7 IHSA Super-sectionals and IHSA State Championships in 1961, 1962, and 1963 including the first title game at the Assembly Hall. Tortorello served as a Big Ten official for 21 years, the longest tenure on the Big Ten staff at the time of his 1983 Hall of Fame induction. In addition, Tortorello served as an official in the NCAA college division regionals in 1959, 1960, 1962, and 1969; and the finals in 1965 and 1971. Several years ago, Tortorello was voted as one of the top three officials in the past 25 years in Illinois in a poll conducted by a Chicago newspaper. Tony was a graduate of St. George High School in Evanston and old St. Viators College in Bourbonnais where he competed in basketball, football, and track.  Tony died on June 11, 1992.