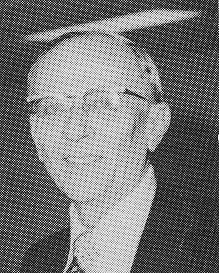 Seldom has a basketball official been held in the high esteem as Ed Johnson.  Although overlooked by the IHSA as a floor official at the state finals, never could any application to the Hall of Fame come more highly recommended.  Letters endorsing Ed’s candidacy included those of 9 earlier inductees, a state representative, six school superintendents and former Miami Dolphin head coach Lou Saban. Johnson complied a 109-44 record as Litchfield head coach.  He officiated 1,700 basketball games and a total of 2,500 high school events.  He organized the Quad County Officials Association in 1952 and served as its secretary for 16 years.  In 1953, he served on the Illinois Basketball Rules Committee.  In 1962, Ed was one of the three officials used in the nations’ first experiment for what has become the standard for college and high school varsity games.  The game was played between Loyola University and Washington University.  Ed was as highly regarded at the collegiate level as at the high school level.  He regularly drew the tough assignment as an official for the Illinois Intercollegiate Athletic Conference.